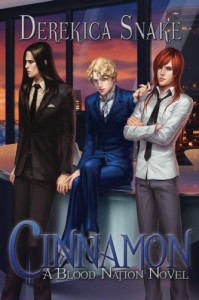 **WARNING** Those prone to motion sickness should take Dramamine before reading this book.

A seriously messed up addition to the vampire saga of Blood Nation. Once again, totally out there and unrepentant in the crazy persona roulette going on. I give major kudos to Snake for individualizing the characters of Azrael, Xavier, Sex, Armor, Marcus, Carnage, and Claudius so well that there is absolutely no trouble following who the heck is on the page at any given time. And let me tell you, this is no mean feat as they jump in and out with abandon.

If you've read Snake then you're prepared for the insanity. If you haven't, check the warnings. And you must be this twisted to read it:


Love this installment. There are couple new grenades tossed that upset the apple cart. Hades in particular pisses me off. That Ancient has something coming for him. Forget strange bedfellows, the man's an asp.

Claudius and Marcus have some moments of brilliance and stupidity. Again. That said there are some scorching scenes. Wicked hot. Everyone gets a moment in sun and it is HOT!

When that man got his cherish on, I wanted to do nothing more than kneel at his feet forever.

As the Lord Emperor, it was probably smart to keep the number of people who called me by my first name to a select few, and I was pretty sure that it was not a good idea to have the kid dry-humping my head as one of those few.

Sex might fumble a few things, but when he works it right--BAM! Talk about loading the bases for Azrael to bring them home.

When chaos isn't exploding around them this is actually a very sweet and loving story. Of course, then something gets ripped to shreds and then you want to throw the book/ereader/computer. But hold tight and close your eyes if necessary 'cause the last twirly spin twist sets up a whole new game for book #4.

I wanted Armor with me so badly right now, but Marcus needed me. They were like salt and pepper. We, the Brothers and Father, were the rest of the spice rack.